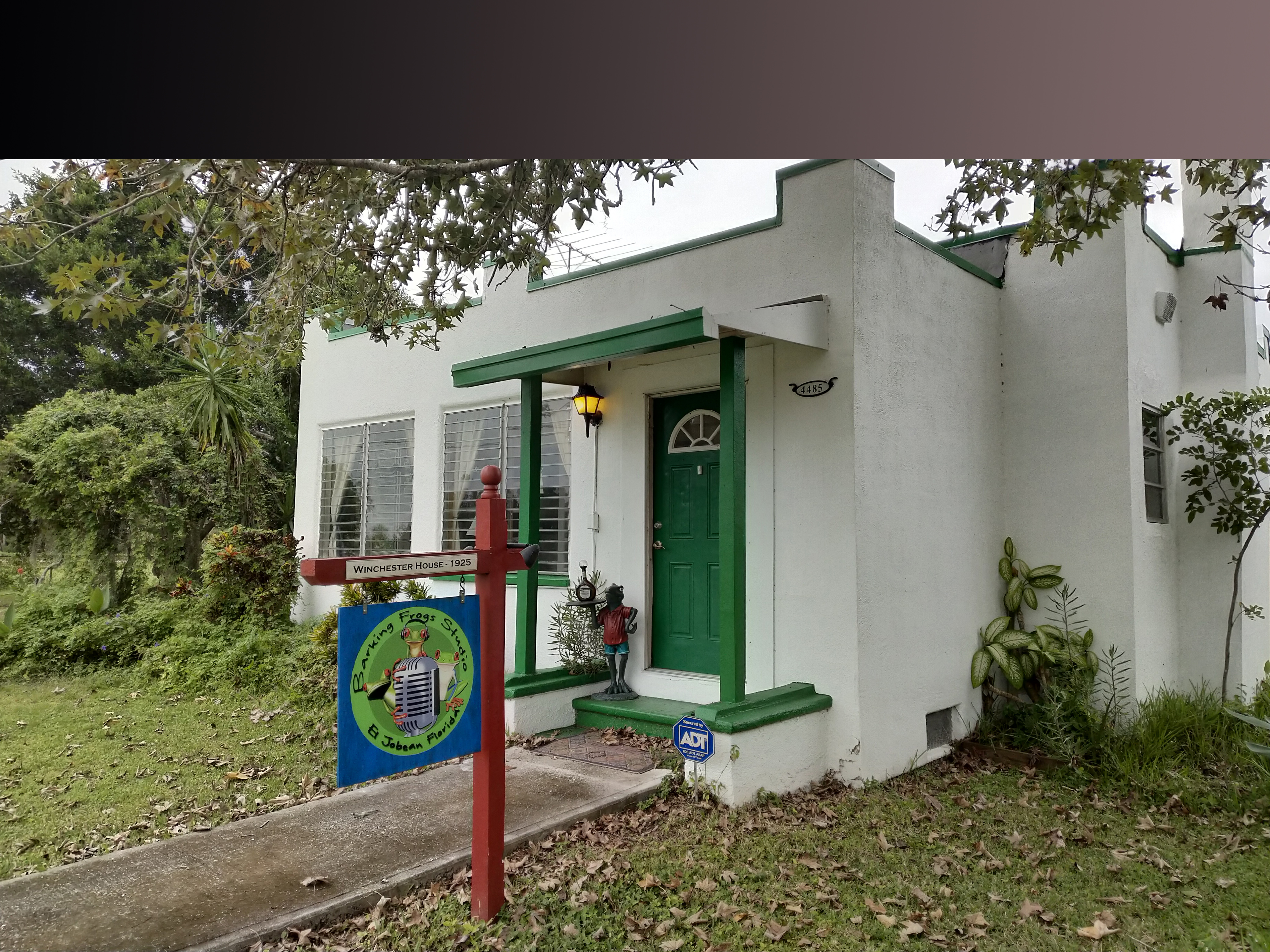 What’s In A Name?

On a hot and humid Florida summer night near the banks of the beautiful Myakka River as we were sitting in the studio admiring our renovations and drinking a few adult beverages, the conversation turned to “what should we call this place?” As you might guess, the banter influenced by the drink was filled with a series of unusable and somewhat inappropriate titles. During a break in the action the rain started. A moment later a chorus of tree frogs living in the chimney turned the old fireplace into a giant saxophone. It was an amazing concert. When it was over someone asked, “what was that?” Our resident egghead piped in, “those are barking frogs, very common down here by the river.” With that we raised our glasses and cans and proclaimed a toast to The Barking Frogs Studio.

Since that night, we convinced the frogs not to live in the chimney, but they still frequent the rain gutters and eaves and you can sometimes see them peeking in the windows while we record. We suspect they are true acoustic music lovers, and you can still hear their heavenly chorus on our porch on a rainy summer night.

Back in the early 1900’s Joel Bean had a dream to build a model city on the banks of the wild Myakka River near Charlotte Harbor. His vision grew into a community of pioneers who fished the bountiful waters and grew cucumbers, peppers and celery in the dark, rich soil of the river bottom lands.  The arrival of a railroad from Sarasota and Tampa brought a new wave of wealthy adventurers who came for the weather, the sailing and the tarpon fishing.  They built small mansions on the river and spent their evenings sitting with neighbors, eating well prepared food and playing music on their porches and parlors. Then came the Great Depression and Joel Bean found himself bankrupt and his dream in tatters and most of his residents moved back north. Today, most of those old homes are gone with three notable exceptions;  The Adams Estate built by the Wrigley Chewing Gum family, the Train Depot, and the Winchester House.

The Winchester House, built in 1925 is made from locally sourced phosphate concrete with cedar and oak floors and a parapet roof that mimics a castle.  An addition was added in 1930 and forms the footprint of the house today. Restored to it’s former glory in 2016, the house now glows with music just like it did in the glory days of El Jobean.

The Ghost of Mrs. Winchester

The stories over the years have been similar and quite a few neighbors and guests have briefly seen a smiling old woman, sometimes with a cat, sometimes with a banjo. Others have experienced that “feeling”, sometimes a plate moves across the table, sometimes lost items are found in unexpected places, none of the clocks keep correct time. On a quiet late evening with the lights off, some swear to have heard soft banjo music.  It’s just one of those timeless Florida mysteries, is it real or imagination?  We do think that if she is real, she is enjoying the house filled with music and musicians, just like in the olden days. Do you believe in ghosts?